Ode to a Grecian Isle

Each morning when the sun rose over Asia and cleared the headland to the east of Makriyalos in Crete, I would wake to a tumult of light in the white room. Bars of light shone on the walls through the timber slats of the big window. Linda was already downstairs getting breakfast. We ate on the bedroom patio. Through openings in the whitewashed outer wall we could see the beach, the little harbour, the azure Libyan Sea with caïques and launches at their moorings, and the stark headland beyond. To the left, in the shade of feathery tamarisk trees, Dmitri of the Olympio bar was setting out tables. Already on the beach, svelte women from Northern Europe were taking the sun with their children. Soon I would join them for a lazy wallow in the warm sea.

Makriyalos (Greek for 'long beach') is in eastern Crete where, for the moment, only enterprising tourists come to stay in the resort hotel. We came via Frankfurt with an overnight stop in Athens, flying to Sitía in a small Dornier plane. We were met by Manolis - who speaks perfect Australian - with his new Mercedes taxi. 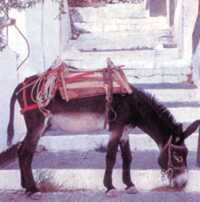 In the '20s when Makriyalos was an annex of Agios Stéfanos, a hill village seven kilometres inland, the buildings warehoused the olive and sultana products of the parish that were to be shipped out by sea. Until the late '70s there was no road from Sitía; transportation was by donkey. European Community grants financed the good road, also the irrigation system fed by aquifers, and other improvements to infrastructure. The region prospers now from olive oil, wine and early vegetables grown in plastic greenhouses along the coast. Tourism is growing rapidly. A new runway under construction at Sitía airport will accommodate non-stop flights from Europe.

No rain had fallen in months, grapes ripened in the vineyards, pomegranates hung like rosy lamps among glittering leaves. White walls blazed with bougainvillea. Here, where humans have lived since the 9th-century BC, peace and plenty reigned.

The mountains were all crags and pinnacles of grey rock riddled with caves. In the bright wind of the heights, guerrillas had put up the fiercest resistance German invaders had encountered anywhere. 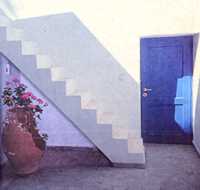 In these mountains tradition lingers. Miriam, an English lady who lives in Makriyalos, told us of evenings spent with villagers when one aged reciter would declaim the whole of the Erotocritos, a romance in rhyming couplets more than 10,000 lines in length, a Homeric entertainment. Listeners would join in the recital of favourite passages. The art of improvising couplets on the spot survives.

Within 100 metres of our house was the site of a big Roman villa; about one kilometre away was a Minoan site from 1500 BC. The greengrocer to whom we went for fruit and vegetables was taking a phone call. He was speaking to his son in Athens. He had hoped for help with the business, but the son had decided to become a priest.

During our tranquil three weeks we were by my daughter from Vancouver. She loved her room with its iron four-poster bed. The lotharios who hit on her with thoughts of Shirley Valentine amused her. "You don't have time?" one of them exclaimed, astounded that anyone could resist his lovely self. "Not for you!" she laughed.

One morning we boarded a big launch at the jetty opposite our house for a day trip to the island of Koufonísi (classical Lefki or Leuce) to the south in the Libyan Sea.

The trip took 45 minutes. The coast was rocky and sunburned, the island long and low. We entered a bay sheltered by an islet, to land on jagged rocks. On the beach was a thatched shelter with tables and benches where, around noon, we had beer and souvlaki. We swam in the clear waters over clean sand.

Nearby, tumbled blocks of masonry and segments of columns were relics of an ancient town where purple dye was extracted from minute shellfish, Murex trunculus, worth its weight in silver. In 1903, Toronto-based archaeologist C.T. Currelly inspected the site and thought it worth excavating. A theatre was unearthed in 1976. A temple survived until 1920, when its stones were taken to build a new lighthouse.

Back on the main island, we rented a car. We toured the hill villages in our area, driving on mountain roads through valleys of olive groves and vineyards or upland pastures under cliffs and tusks of rock. The villages, facing south, climbed slopes with stairs for streets and centred on the kaffeeneion, where old men sipped coffee or raki and talked. Linda spoke enough Greek to make friends. We were charmed by their dignity, their courtesy, and their humour. When we paused to admire a flower garden in Agios Stéfanos, a woman came out and, smiling, gave us fragrant bunches of sweet basil. We thanked her. "Tipota!" she said, "It's nothing!"

Visiting the tiny Byzantine churches glowing with icons, I got to know the saints by sight. Nikos (Santa Claus to us) was a favourite, with his fancy haircut. George, of course, was here, spearing a monitor lizard. Panteleimon, patron of bakers, was new to me, carrying a spicebox with three compartments and a spoon. John the Forerunner was a dishevelled figure with brightly coloured wings, prudently bearing a spare head on a plate. Often we saw the three patriarchs, Gregory, Basil, and Crysostom; severe of aspect, they never looked us in the eye.

Once I passed a church in which a priest was chanting; the walls fairly buzzed, like a matchbox with a bee in it. The churches smelled of beeswax candles and incense. 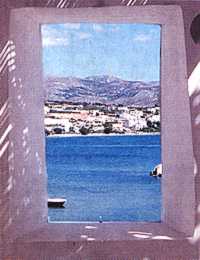 Later, we took a tour with Manolis in his Mercedes, driving from Sitía into windswept uplands around the great monastery of Toplou, which is under restoration. On high ground there were two wind-farms with tall masts like those seen in California. For miles around, the land belongs to the monks, though only two of them remain. The 14th-century church, an intimate, mysterious space glittering with gold, displays a famous icon, "Great is the Lord", inspired by phrases in the liturgy. There are many others in the treasury, and the museum exhibits early printed images.

The frescos impressed us, traditional images rendered with brilliant energy, the work of a local artist who is partly disabled. Looking into the kitchen I saw a pine table bearing three carrots, a knife, and a transistor radio. Something smelled delicious. Manolis sniffed and said, "After you've seen the palm groves and beach at Vai we'll have a snack at my house."

At Vai, in the northeast of the island, we saw the famous date palms, unique in Europe. Legend has it that they were planted by Phoenicians. The beach is delightful, though crowded.

On the way to Paleokastro, he showed us some of his own olive groves and then, in the town, his new house under construction. Manolis grew up in Melbourne, Australia, graduated from the Greek Marine Academy, and served at sea for 10 years as an officer in the merchant marines. His wife is a lawyer who administers archaeological sites.

The snack turned out to be a lavish spread of mezze or hors d'oeuvres, typical of Greek hospitality. We sat under a pomegranate tree in the flourishing vegetable garden watching Manolis' father-in-law and a friend at work. The 90-year-old grandfather looked on expectantly. They distilled raki in an ancient copper alembic, heated with blazing olive wood. They kept giving us liquor hot from the still. The old man smacked his lips and nodded at me. "This will see us through the winter", Manolis said. Made from a mash of fermented grape skins, it was a kind of grappa or eau-de-vie. Though my eyes did cross, it went down in the friendliest way. I still have some in the plastic Coke bottle that Manolis filled for me. Sipping it, I can recover every moment of that day.

© Kildare Dobbs 1999
Not to be reproduced in any manner without written permission from the author.

Poet, travel writer, teacher, film-extra in Laurence Olivier's Hamlet, quiz-show panellist - Kildare Dobbs has played many parts, been many places, met many people. His life's journey, marked by frequent detours and diversions, from Asia to old Euprope, Africa and the New World, is that of the quintessential post-colonial Western man at large.

Kildare's autobiography 'Running the Rapids - A Writer's Life' is now available from amazon.co.uk.