Crete is the perfect place for a relaxing holiday, but did you know that it was also once home to one of the world's most ancient civilisations? 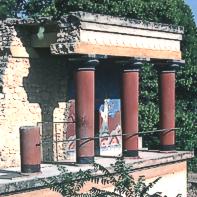 A reminder of the Minoans

From 3,000 to 1,100 BC Crete was ruled by the Minoans - a fascinating people who have left behind many traces of their culture, from the fabulous palace at Knossos to fragments of pottery which can be dated as far back as the Neolithic period. Named after their legendary king, Minos, the Minoans were for a long time the most advanced civilisation in the western world.

Piecing together evidence found all over the island, archaeologists have been able to create a vivid picture of life in ancient Crete. Frescos and vases are painted with scenes both mundane and religious: dances and processions, goddesses and magical gardens, hunts and sports and harvests. The Minoans dressed in bright colours, and dined on cheese, fish, wild fruit, milk and wine, flavoured with honey, salt and herbs. From 2,700-1,900 BC they used a primitive hieroglyphic script, which later evolved into an early form of the Greek language.

Their culture was heavily steeped in a religion which appears to have been dominated by female deities. Their most important goddess was Potnia. She had a double axe as her symbol, and offerings of honey were often made to her. Other divinities seem to include a fertility goddess, a young male deity, a goddess of wild animals, a mountain mother, a goddess of caves, a tree goddess and a bull god.

The two most common motifs in Minoan art - the bull and the snake - were probably sacred. There are statues of goddesses with snakes twined around their waists, and frescos of slender young acrobats leaping over charging bulls. The dangerous practice of bull-leaping is one of the most striking aspects of Minoan civilisation, and may have given rise to the myth of the Minotaur.

According to legend, the wife of King Minos gave birth to a hideous flesh-eating creature with the body of a man and the head of a bull. Minos kept this monster, the 'Minotaur' in a labrynth beneath his famous palace at Knossos. Every seven years he would force the neighbouring kingdoms to send him a tribute of seven young men and women to be fed to the creature. It was eventually slain by the Greek prince Thesius, with the help of Minos' daughter Ariadne.

Historians have speculated that the seven young men and women sacrificed to the Minotaur may actually have been acrobats who performed the bull-leaping dance. This highly perilous activity involved standing in the path of a charging bull, grabbing it by the horns and then being flipped over its back as it tossed its head. Obviously, there must have been many casualties. Similarly, to the fanciful mind, the frequent earthquakes which shook the labyrinthe palace of Knososs could have seemed like the thundering of a monster trapped beneath the ground.

If you are interested in learning more, there are plenty of Minoan sites in Crete for tourists to visit. After more than two thousand years, the great palace at Knososs is still standing, and new discoveries are being made all the time.

For those looking for something closer to hand, there are even some Minoan ruins in Makrigyialos — just off the main road heading west out of the town — waiting to be explored!