Music and an ancestral poem fan the fires of a Cretan romance. 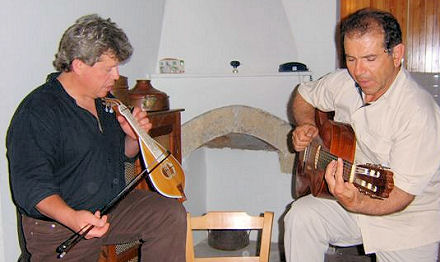 Candlelight shone from the eyes of seven of us, sitting round the small table after a dinner of tender Cretan lamb. Linda and I had rented this charming house that faces the little harbour of Makrigialos in eastern Crete, and beyond it to the dark blue Libyan Sea. The house, on the outside white with blue doors, has had its luxurious interior remodelled with every convenience by a Venetian and Cretan architect.

We were joined by our friend Ted Roberts, the Toronto musician, my daughter, Sarah, from Dublin and my 23-year old grand-daughter, Lael, from Vancouver. Our two guests were Nikos Tsikalakis, a former archeologist who manages this and other properties here for our Norwegian friend Gunnar, and Manolis Kanavakis, architect, deputy mayor and guitar player. They were about to give us a taste of Cretan music and song.

Nikos, who makes up in vitality and charm what he lacks in inches, plays the Cretan lyre. It looks like a small mandolin with three strings, richly inlaid, and is played on the knee with a bow, loosely held with the palm upward. It resembles the Turkish kemence; both instruments probably originate with Byzantium. Manolis, a serious man, is a professional musician, deeply versed in the island's musical tradition.

They began playing, Manolis laying down a rhythmic theme, and Nikos weaving arabesques around it. Their faces glowed, Nikos looking the image of a strong angel I'd seen somewhere in a Renaissance painting. Their eyes met as they began to chant a strange wild song that seemed older than the craggy mountains behind us. They'd sing a few bars, then let the music speak. Then they'd sing again.

What they were doing was declaiming part of the 10,000-line romance Erotocritos, which is the Cretan national poem. Some years ago I met an Englishwoman here who had heard, at a party in the hills, a rhapsodist who could chant the whole poem by heart, the mountaineers joining in favourite passages. And many more years ago in Montenegro, I heard an old man chanting with a one-stringed lyre, which a classics professor told me was how the Iliad and the Odyssey were declaimed.

Erotocritos is the work of Vitzentzos Kornaros, an aristocrat from nearby Sitia. Like most long poems, it is adapted from well-known originals. The story is from a French prose romance and came to Crete with the Venetians at the Renaissance, more or less contemporary with Shakespeare. The music is clearly much older, with an Arabian subtlety.

Nikos and Manolis were enjoying themselves, playing for hours, including some of Manolis's own songs.

Aside from that, what did I do in Makrigialos? Well ... nothing. That is, apart from walking round the little harbour or along the shore, or sitting under an umbrella at the Olympiad bar, run by the dashing Dmitri. He and his wife, Chara, serve the best lemonade I've drunk anywhere; spiked with a shot of gin it's ambrosial. For lunch, I ate a Cretan salad with hard-boiled eggs, delectably fresh with yolks almost red. Dmitri is a sophisticated man with dark good looks who trained for the sea at Marine College, and made several long, boring voyages as a deck officer. In his excellent little bar, he's found a quiet living, which he and Chara persue with imagination and charm.

Come to think of it, I wasn't totally idle. Sarah rented a car and we drove to the famous Toplou monastery, whose three surviving monks pass their days in prayer and meditation, while their vast estates prosper. They rent land to the government for a wind farm, which provides electricity for the area; they do a roaring trade in olive oil and wine. Cretan olive oil is the world's best. In the busy monastery shop you may buy hand-copied icons of your favourite saints, books of the region and thyme honey. I bought an English translation of Erotocritos, illustrated with images from the British Museum and with a preface by Lawrence Durell. The Cretan original is in rhyming couplets of 15-syllable lines; the translation substitutes English iambic pentameters. It's interesting, but the poetry has evaporated, as so often with translation.

The ancient monastery is built like a fort, and its armoury exhibits rifles and other weapons used against foreign invaders. Occupied at various times by Muslim Turks and Roman Catholic Venetians and, most recently, Nazi Germans, Cretans base their identity in their Orthodox church. Here we met our old friend and taxi driver, another Manolis, who grew up in Australia and now prospers here. He loves to explain things from first principles. His influence permitted us to visit the refectory, whose frescoes of saints and angels have just been renewed in 40 years of work by a painter almost totally paralyzed, except for slight mobility in his hands. He was recently injured by falling from a ladder. The frescoes are glorious. I thought of Yeats's line "O sages standing in God's holy fire..." We met the artist's wife, small, vivid, her gestures completely expressive.

Manolis took us to his new, big house where his wife, an archeologist who supervises an excavation site, provided lavish food. "If I'd had more time," she said, "there would be more." We ate and ate, could not have eaten more. She also paints traditional icons.

Take it all around, we did a power of eating at the many tavernas by the shore: fresh fish and lamb and crisp produce from the many greenhouses along the coast.

Makrigialos means "long beach" and this one is just right for children. The sea is shallow for a long way out. I though Linda was going to walk to Africa but, just as she was disappearing over the horizon, she turned and came back.

See also: Ode to a Grecian Isle by Kildare Dobbs.

Poet, travel writer, teacher, film-extra in Laurence Olivier's Hamlet, quiz-show panellist - Kildare Dobbs has played many parts, been many places, met many people. His life's journey, marked by frequent detours and diversions, from Asia to old Europe, Africa and the New World, is that of the quintessential post-colonial Western man at large.

Kildare's autobiography 'Running the Rapids - A Writer's Life' is now available from amazon.co.uk.