The Venetian Estate in Sitia 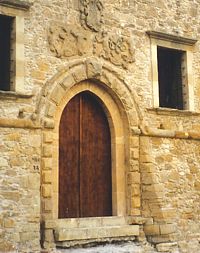 Our name, 'Casa dei Mezzo', is taken from the Venetian Estate in Etia, in the province of Seteia (now Sitia), Crete. The village of Etia was at the height of its glory in 1583 when it boasted 564 inhabitants. It was in this period that Piero, the Fief of the Venetian dei Mezzo family, constructed his grand three-floored mansion - the Casa dei Mezzo. He built an elegant villa on a hilltop overlooking the thriving village, where it was surrounded by lush green valleys of olive trees.

Towards the end of the 15th century the Venetians were driven out and Turkish notables established themselves in the estate. With the passing of time the beautiful villa gradually decayed and lost its glory. All three floors remained intact until 1828 when, after being blockaded, 600 armed men and 300 women surrendered to the Christians who then tore the roof off the building and removed its timbers. Later on the second floor fell into ruins and now only the lower part of the mansion is still standing, surrounded by that timeless fertile green land and olive trees.

Listen with your heart

If you listen with your heart as you wander through the ruins of Peiro die Mezzo's Estate, you can still hear echoes of time as it was.

Currently the mansion at the estate is known in the neighborhood as Seraio, from the Turkish 'saray' (seraglio - a walled palace; a palace of a Sultan). Casa dei Mezzo has now built a new 'Saray', again surrounded by fertile olive groves, which will soon begin producing even more of our Extra Virgin Olive Oil.

See our article on Cretan olive oil to learn more about the fascinating history of olive oil production in Crete.

Finally, don't forget to take a look at our accommodation pages to find out how you could be enjoying your next holiday in the luxury of our holiday villas or apartments.